Japan Gold chose to focus its exploration activities in Japan for a number of reasons:

Japan Gold has a total of 12 separate project areas located within known epithermal gold provinces and prospective for high-grade epithermal gold mineralization. Ten of the projects are located on the island of Hokkaido, and two of the projects are located on the island of Kyushu. All of the prospecting rights applications covering these projects have been accepted, reserving the ground for Japan Gold and allowing for surface forms of exploration including mapping, geochemical sampling and geophysics. To date, 38 of the 56 applications over the Ikutahara Project, 5 applications over the Ohra-Takamine, and 4 applications over the Tobaru Project have been converted to Prospecting Rights authorizing the Company to commence more advanced exploration methods, including drilling. Japan Gold has generated drill targets focusing on epithermal vein targets in and around historic mines and workings through evaluation of historical data and the Company’s own detailed work. The Company is currently progressing several targets through the drill permitting process in order to commence drilling in the first half of 2019. Priority drill targets for 2019 are within the Ikutahara and Ohra-Takamine Projects. 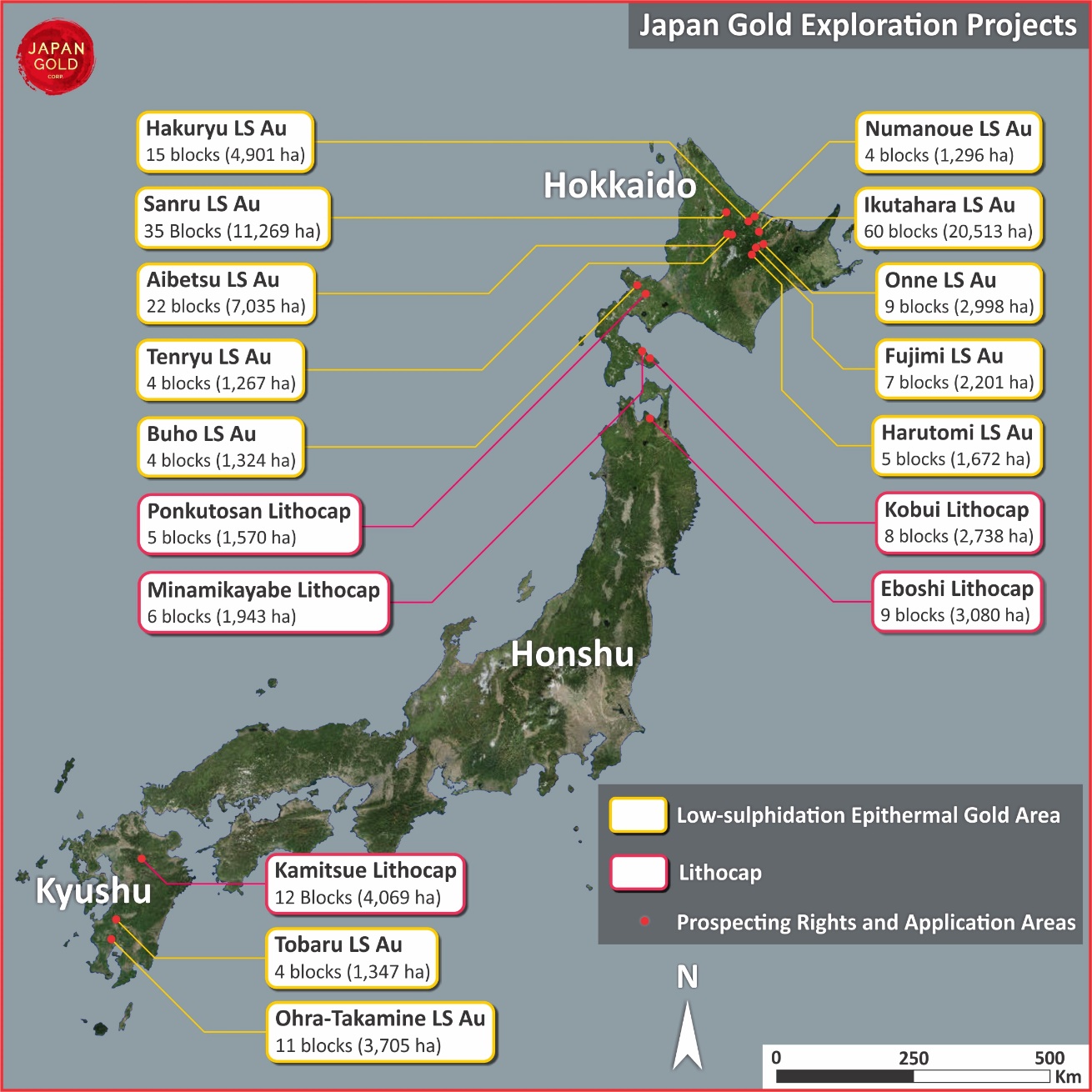 Japan Gold has five lithocap projects: Kobui, Ponkutosan, and Minamikayabe in the island of Hokkaido; Eboshi in northern Honshu, and Kamitsue in Kyushu.

Nine prospecting rights applications (3,080 hectares) at the Eboshi Project in northern Honshu and twelve at the Kamitsue Project in Kyushu have been converted to Prospecting Rights.

The remaining 19 prospecting rights applications (6,252 hectares) covering Kobui, Minamikayabe, and Ponkutosan have been accepted reserving the ground for Japan Gold and allowing surface exploration including mapping, geochemical sampling and geophysics.

In October 2018, Japan Gold entered into a binding Letter Agreement with First Quantum Minerals Ltd. (TSX:FM) to explore four of its prospective lithocap projects. Pursuant to the terms of the Letter Agreement, FQML conducted a systematic surface exploration reconnaissance program on each Project with Japan Gold’s team acting as the Operators. The Letter Agreement was discontinued by FQML on April 4, 2019.

Japan Gold is encouraged by the early-stage data generated by FQML and believes that three of the projects (Eboshi, Kobui and Kamitsue) warrant further investigation including geophysics and drilling in order to more thoroughly investigate their potential for porphyry mineralisation.

John Proust has successfully founded and managed a number of resource companies. Mr. Proust has served on the boards and held senior operating positions, and has directed and advised public and private companies regarding debt and equity financing, mergers and acquisitions and corporate restructuring since 1986. Mr. Proust is currently Chairman and CEO of Southern Arc Minerals Inc., Chairman and a director of Canada Energy Partners Inc., and a director of Rise Gold Corp. Mr. Proust has extensive experience in corporate governance, is a graduate of The Directors College, Michael G. De Groote School of Business at McMaster University and holds the designation of Chartered Director.

Dr. Mike Andrews is a geologist with more than 40 years of research and mining industry experience in gold, copper, coal and iron. He holds an honours degree in Geology from the University of Reading, and a doctorate in exploration geochemistry from the University of Wales. Dr. Andrews is also currently President & COO and a director of Southern Arc Minerals Inc.,and a Non-executive Director of Kingsrose Mining Limited.  He was a founding director of Kingsrose Mining Limited and played an instrumental role in the discovery, exploration, feasibility and development of its Way Linggo Gold Mine in Indonesia. Dr. Andrews also held the positions of Executive Director and Chief Geologist of AuIron Energy Ltd., Director of Gold Operations for Meekatharra Minerals Ltd., and managed the Teck-MM Gold Indonesian Joint Venture, an exploration portfolio of thirteen gold and copper projects in Indonesia. He also held senior exploration positions with Ashton Mining Ltd, Aurora Gold Ltd., and Muswellbrook Energy and Minerals.

Mr. John Carlile is a geologist with more than 35 years of experience in the resource industry. Mr. Carlile has held senior executive and director positions with both major and junior resource companies, including President of Indonesian and Philippines subsidiaries of Newcrest Mining Limited, and Chairman of Singaporean public listed oil company Pearl Energy Ltd. As a geologist, Mr. Carlile has a proven track record of mineral discovery and business building in Asia, most notably as Exploration Manager, Asia for Newcrest Mining Limited when it discovered its Gosowong mine. Mr. Carlile has served on the boards of several resource companies, and currently holds the position of director of Southern Arc Minerals Inc. He holds a BSc in Geology from University of Reading, England, and an MSc in Mineral Exploration from the Royal School of Mines, Imperial College, University of London. Mr. Carlile is a Fellow of the AusIMM and a Fellow of the Geological Society of London.

Andrew Rowe comes to Japan Gold through his previous position with Southern Arc Minerals. Mr. Rowe joined Southern Arc in 2006 as a Senior Geological Consultant and was soon promoted to Chief Geologist and then Executive Vice President, leading Southern Arc’s exploration programs from grassroots exploration through to completion of the first resource estimate at the company’s West Lombok Project. Mr. Rowe graduated with a Bachelor of Applied Science degree in Geology from the University of Technology, Sydney, Australia. He is a Member of the Australasian Institute of Mining and Metallurgy and a Fellow of the Society of Economic Geologists. Mr. Rowe has experience in mineral exploration and project management in Australia and various countries in Southeast Asia including Thailand, Indonesia, Mongolia, China and Laos. During this time he held exploration positions with Renison Goldfields, Normandy Anglo Asia, Phelps Dodge, Aurora Gold and Ivanhoe Mines. Immediately prior to joining Southern Arc he was the principal geologist for Pan Australian Resources Ltd (Laos) and part of the team responsible for successfully bringing the Phu Kham Cu-Au porphyry deposit through to bankable feasibility.

Takashi Kuriyama, a geology graduate of the Mining and Geology Department of Akita University, served in increasingly senior roles with Sumitomo Metal Mining Co., Ltd. (“Sumitomo”) from 1974 until his recent retirement as General Manager of its Global Exploration and Development Department. During his career at Sumitomo, Mr. Kuriyama had the role of Exploration and Geology Manager at Sumitomo’s Hishikari world class gold mine in Kyushu, Southern Japan, and subsequently held senior exploration positions in Africa, Australia, Mexico, Canada and the United States of America. In the roles of Executive Vice President of Sumitomo Metal Mining America Inc. and Managing Director of Sumitomo Metal Mining Oceania Pty Ltd., he oversaw the development of the Northparkes copper-gold porphyry copper mine and the Pogo gold mine in Alaska. During his career with Sumitomo, he was seconded to Japanese Government Organizations serving as Councilor at the Metals Exploration Group of the Japan Oil, Gas and Metals National Corporation (JOGMEC) and Director at the Joint Venture Exploration Division for the Metal Mining Agency of Japan (MMAJ). Mr. Kuriyama also served as a Director of Teck Resources Limited from 2006 until 2016.

Kotaro Ohga held the position of Associate Professor at Hokkaido University in the Graduate School of Engineering. With a PhD in Mining Engineering, Dr. Ohga has extensive experience with permitting and drill programs in Japan. As Chief Engineer, Dr. Ohga is the main point of contact between Japan Gold and the Japanese Government, offering invaluable insight and expertise as Japan Gold advances its properties.

Mitsuhiko Yamada, BA (International Economics)
Director
Mitsuhiko Yamada is a mining business professional with international experience overseeing all aspects of mining projects from exploration through to production. He earned his degree in International Economics at Keio University and spent his career with Sumitomo Corporation. Mr. Yamada worked around the globe for Sumitomo, managing various mining projects and overseeing joint venture relationships with some of the world’s biggest mining companies, including Newmont, Phelps Dodge, Teck, Xstrata, Rio Tinto and Sherritt. Mr. Yamada held increasing senior roles with Sumitomo, ultimately achieving the position of Executive Officer and General Manager of Mineral Resources. Mr. Yamada retired from Sumitomo Corporation in 2012 and is currently a Lecturer of English at the Department of Industrial Engineering & Management at Kanagawa University.

Robert Gallagher, BApSc
Director
Bob Gallagher has more than 40 years of experience in the mining industry and is a Mineral Engineer with a specialty in mineral processing. Currently Mr. Gallagher is a director for Yamana Gold Inc., Southern Arc Minerals Inc., Capstone Mining Corp., and BC Hydro. Most recently, he held the position of President and Chief Executive Officer at New Gold Inc. Previously, Mr. Gallagher held increasingly senior management roles at Newmont Mining Corporation over a seven-year period, including Vice President Operations, Asia Pacific; Vice President, Indonesian Operations; and General Manager, Batu Hijau. Earlier in his career, Mr. Gallagher worked at a number of operating mines located throughout the Americas and Asia in various engineering, metallurgical, and mine management roles, including most notably 15 years at Placer Dome Inc. Mr. Gallagher has considerable project development and operational experience. He has been recognized by industry associations for his contributions throughout his career, most notably in 2013 he accepted the Prospector & Developer Association of Canada's Viola R. MacMillan Award for Company or Mine Development on behalf of New Gold Inc., and in 2014 he was jointly recognized by the Association for Mineral Exploration British Columbia with the E.A. Scholz Award for excellence in mine development.

Dr. Sally Eyre, PhD (Economic Geology)
Director
Sally Eyre is a mining finance professional with extensive experience in global resource capital markets and mining operations. Dr. Eyre is also currently a Director of Adventus Zinc Corp. and a Non-Executive Director of Centamin plc. During 2011 to 2014 she served as President & CEO of Copper North Mining and prior to Copper North Mining she served as Senior Vice President, Operations at Endeavour Mining, responsible for a portfolio of exploration, development and production projects throughout West Africa. Dr. Eyre also served as President & CEO of Etruscan Resources Inc. (now Endeavour Mining Corp.), a gold company with producing assets in West Africa. She has served as Director of Business Development for Endeavour Financial Ltd. and has held executive positions with a number of Canadian resource companies. Dr. Eyre was appointed Senior Vice President, Corporate Development of Petro Rubiales Energy Corp. (now Pacific Rubiales Energy) and also served as Vice President, Corporate Affairs of UrAsia Energy Ltd. (now Uranium One). In 2003 she served as President & CEO of TLC Ventures Corp. (now Calibre Mining Corp.). Dr. Eyre has a PhD in Economic Geology from the Royal School of Mines, Imperial College, London. Dr. Eyre is a member of the Society of Economic Geologists (SEG) and a former Director of the SEG Canada Foundation.

Murray Flanigan CPA, CA, CFA
Director
Mr. Flanigan is a management consultant providing financial advisory services to a number of public and private oil and gas, mining and technology companies in North America and abroad. Mr. Flanigan is a Chartered Accountant and a Chartered Financial Analyst with expertise in corporate finance, mergers and acquisitions, international taxation, risk management, banking, treasury, corporate restructuring and accounting, and has served as Chief Financial Officer for various public and private companies. Mr. Flanigan is currently a Managing Principal of Kepis & Pobe Financial Group Inc. and a key member of its executive management team responsible for the negotiation and closing of numerous recent large scale oil & gas transactions in West Africa, offshore Guyana and the Middle East. Prior to founding his own consulting company, Mr. Flanigan served as Senior Vice President, Corporate Development and CFO of Qwest Investment Management Corp., where he was responsible for regulatory reporting and corporate filings for over 15 private and publicly listed companies and limited partnerships in Qwest's portfolio, as well as arranging and closing numerous equity and debt financings. Mr. Flanigan also served as VP Corporate Development for Adelphia Communications Corporation, overseeing the company's financial restructuring and ultimate sale to Time Warner Inc. and Comcast Corporation for approximately US$18 billion.