You will receive alerts when there are new announcements on Sanatana Resources Inc. 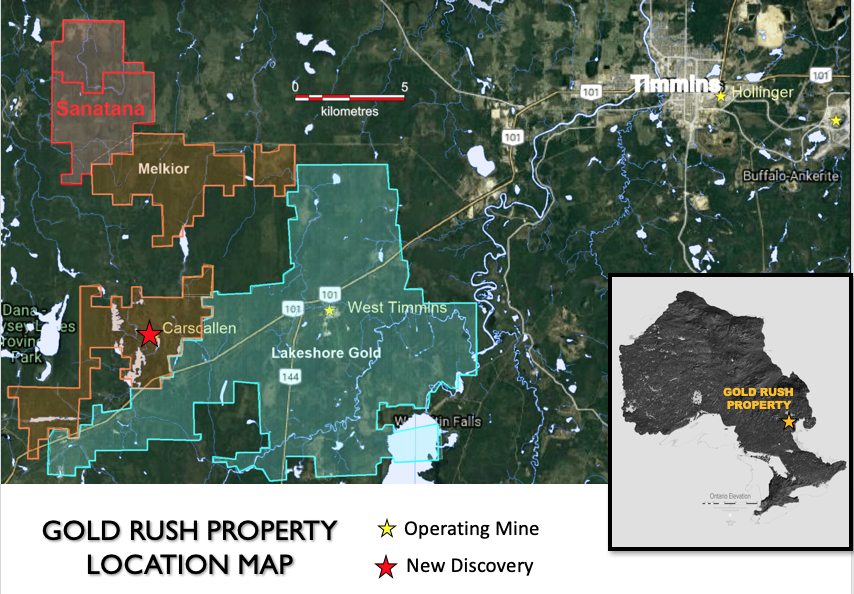 Excellent access via the Montcalm Mine Road which intersects Hwy 101 approximately 13km west of Timmins. Several logging roads and trails extend north off of the Montcalm Rd to provide easy access to the east and west sides of the claim block.

The south block of 76 cells (1,525 Ha) situated  in west-central Turnbull and Carscallen Townships.

Solomon Islands are situated north of Australia and to the east of Papua New Guinea and form part of a prolific mineralised belt, with numerous world class gold and copper mines.

Sanatana is working with CNE and the Solomon Islands Ministry of Mining to ascertain when travel can be safely made to the region.

The Santoy property is located on the northern shores of Lake Superior, 20 km east of Terrace Bay via Highway 17, Ontario and comprises 24 cell mining claims covering an area of 446.5 hectares (1,103 acres).

The Santoy property covers the southeast margin of the Terrace Bay pluton granodirorite as well as the contact zone and part of the southern arm of the Schreiber-Hemlo greenstone belt supracrustal sequence that trends northeast - southwest. There is a strongly conductive unit in the greenstone belt sequence delineated as two distinct trends in the publicly available Ontario Geological Survey airborne electromagnetic (“EM”) geophysical survey data, one of which relates directly to a historic silver showing in the east and a nickel-copper showing in the west. Elevated cobalt, copper, lead and silver values in soil sample data reviewed from previous assessment reports may also be related to this conductive unit. There is no recorded drilling within the property.

The Company continues to hold a 1% royalty on the Watershed Property that surrounds IAMGOLD's Cote deposit in Ontario. 50% of the royalty can be purchased by IAMGOLD for $2,000,000 and IAMGOLD has a right of first refusal to purchase the balance in the event of a sale of the royalty. The Watershed Property has a mineral resource reported in accordance with NI 43-101 Standards of Disclosure for Mineral Projects ("NI 43-101") lying adjacent to the south-west of IAMGOLD's Coté deposit.

In addition to the royalty, Sanatana may be able to earn two contingent payments from IAMGOLD:

The Watershed property covers approximately 7,900 hectares. For further details on Sanatana's royalty, see the Company's news release dated January 12, 2016 (a copy of which is available under Sanatana's SEDAR profile at www.sedar.com).

Mr. Miles has a B.Comm from the University of British Columbia. He has more than 25 years' experience in finance and was formerly a Vice President of Midland Doherty Inc., Dean Witter Reynolds, and CIBC World Markets. Prior to becoming President and CEO of Sanatana Resources Inc., Mr. Miles was an advisor to a number of public and private companies, primarily in the natural resource sector including Roughrider Uranium Inc. At a private stage, Mr. Miles financed Roughrider and was later instrumental in Hathor Exploration Inc.'s acquisition of Roughrider. Hathor was acquired by Rio Tinto plc in 2011 for $654 million. Mr. Miles is a Director of Gamehost Inc., and is the founder of Sanatana Resources Inc. Mr. Miles is a commercial pilot with some 3000 hours pilot in command of over 15 different types of aircraft.

Mr. Doyle has a degree in Geology, from the Queensland University of Technology, graduating in 1981. Since graduation he has been engaged in the mineral exploration industry. Highlights include being involved in the discovery and evaluation of the Lihir Gold Mine in Papua New Guinea and the Diavik Diamond mine in Canada, both while working for Rio Tinto PLC. In 2004 he received the  Hugo Dummitt award for Excellence in diamond exploration for his involvement in the Diavik discovery.  Since 2004 Mr. Doyle has been involved in geology consulting and creating and operating mining exploration start-ups listing on the Toronto Venture Exchange and the AIM London Exchange.

This work has been diverse. As CEO of Amarillo gold from 2004 to 2017 he oversaw a near production gold project in Brazil and he was founder and a director of Western Potash from 2007-2017, which discovered and developed the now in production Milestone Potash Project in Saskatchewan. Additionally, Mr, Doyle is a long standing  Member of the AUSIMM (since 1994) a professional association. From 1999 to 2004, he was the Vice Chairman of the MRDU, (Mineral Research development unit) at the University of British Columbia, a group designed to focus on industry needs and seek in kind funding. Mr. Doyle is the founder and current director of Stratus Aeronautics Inc, a private company,  that pioneered the use of robotic aircraft.

Simon is a Chartered Professional Accountant with a broad range of public company experience in Canadian and US markets. For the more than ten years, he has worked in the financial management of public companies, ensuring that public disclosure meets current standards and planning and implementing acquisitions and divestitures. Previously, Simon was a partner with an international accounting and consulting firm practicing in the areas of business valuation and mergers and acquisitions.

Mr. Will is a commercial real estate developer and president, director and co-founder of the publicly traded company Gamehost Inc.

Mr. Smith, a mining engineering graduate of the University of Queensland, Australia, has 50 years’ experience in corporate, operations, and project management and consulting within the international base and precious metals industries.  He has a broad range of underground and open pit operating experience.  He managed a 250tpd shrinkage/resuing silver/gold mine in Sonora, Mexico and consulted on numerous underground high grade silver/gold mines within the Mexican precious metals belt.  He held senior operating positions at the 90,000 tpd Bougainville Copper and 72,000tpd La Caridad startups in Papua New Guinea and Mexico respectively, and as President and CEO engineered and constructed a 2,500 tpd (70,000 opy) CIL gold project in Uruguay.  As President & CEO of bcMetals Corp. he engineered the 30,000tpd Red Chris copper/gold porphyry project for development in northwest BC prior to being acquired by Imperial Metals Corp.  As President  & CEO of Yellowhead Mining Inc. he took the Harper Creek Project from exploration to development stage with the completion of a Pre-Feasibility and a Feasibility Study for a 70,000tpd open pit in a period of 18 months.  Mr. Smith was President and founding partner of one of North America's most successful mining industry consulting companies until purchased by Canadian interests in 1995.

Mr. Dutton is a seasoned business executive and entrepreneur with a successful track record as an early stage investor and business founder. He was most recently co-founder, CEO and director of Cannex Capital, a pioneering US cannabis company, before its acquisition of 4Front Holdings Ltd. to create 4Front Ventures (CSE:FFNT), a large multi-state cannabis operator. Prior to Cannex, he was co-founder, CEO and director of IBC Advanced Alloys (TSX.V:IB), a manufacturer of high-performance alloys serving advanced manufacturing and aerospace contractors globally. He currently serves on the board of Value Capital Trust (TSX.V:VLU.P). Mr. Dutton has a BA (Econ) from UBC, a M. Architecture from Dalhousie and a joint MBA from the Cranfield School of Management, UK and the École Supérieure de Commerce in Lyon, France.

Mr. Hill is a successful geologist and accomplished mining industry professional with over 30 years of global exploration, mining operational and project development experience. He has served in senior exploration and operational roles with major mining companies Anglo American Corporation and AngloGold Ashanti Ltd and has been directly involved with the discovery and development of several world class greenfields and brownfields projects in Africa and the Americas. Mr. Hill is the founder and president of Exploration Outcomes Ltd., a geological exploration advisory firm headquartered in Brazil, is a director of Royal Road Minerals (TSX-V:RYR) and Stratabound Minerals Corporation (CVE: SB), and is a senior advisor to the management committee of Jaguar Mining Inc. (TSE:JAG).

Mr. Hill’s experience in mining and exploration geology, project development and management, and his broad range of contacts in the mining industry has resulted in a unique skill set and an in-depth appreciation and understanding of the global mining business. Mr. Hill holds a BSc (Hons) Economic Geology and a BAppSc in Applied Geology. He is a Fellow of the Australasian Institute of Mining and Metallurgy.