You will receive alerts when there are new announcements on Orgenesis

Orgenesis is a vertically-integrated biopharmaceutical company with unique expertise and experience in cell therapy development and manufacturing.

The Company's MaSTherCell subsidiary is a global Contract Development and Manufacturing Organization (CDMO). Through MaSTherCell, Orgenesis is able to deliver optimized process industrialization capacities to cell therapy companies, and speed up the arrival of these therapies onto the market. MaSTherCell's customers include many of the world's leading pharmaceutical and biotech companies, as well as research institutions and hospitals involved in cutting edge cell therapy.

Orgenesis is also developing its own propriety cell therapies. Through its subsidiary Orgenesis Ltd., Orgenesis is a pioneer in the process of Transdifferentiation (or cell reprograming), whereby an adult cell is converted into another type of cell, with its distinct phenotype and function. Orgenesis has utilized its proprietary technology/processes to successfully reprogram human liver cells into glucose-responsive, fully functional, insulin producing cells. Converting the diabetic patient's own tissue into insulin-producing cells has the potential to provide a practical cure for insulin dependent diabetes and overcome the significant issues of donor shortage, cost and exposure to chronic immunosuppressive therapy associated with islet cell transplantation.

The Company's MaSTherCell subsidiary is a global Contract Development and Manufacturing Organization (CDMO). Through MaSTherCell, Orgenesis is able to deliver optimized process industrialization capacities to cell therapy companies, and speed up the arrival of their therapies onto the market.

From technology selection to business modeling, GMP manufacturing, process development, quality management and assay development, MaSTherCell's teams are fully committed to helping our customers fulfill their objective of providing sustainable and affordable therapies to their patients. 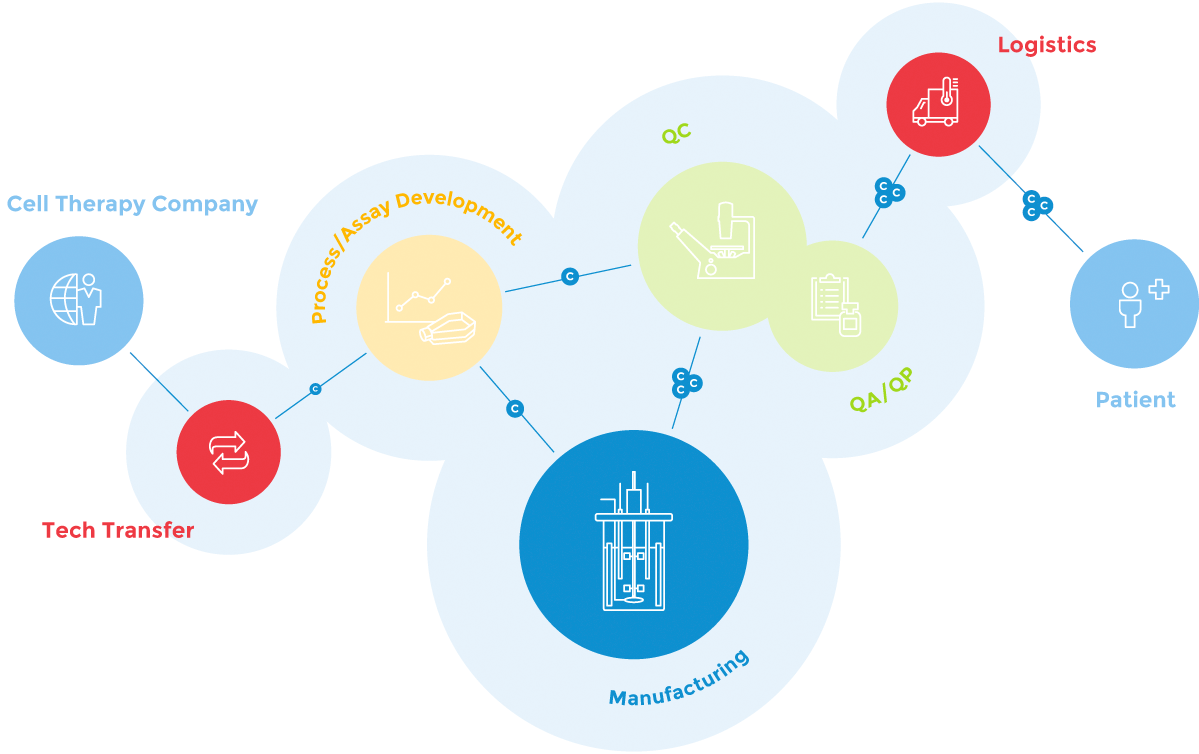 The key competitive advantages that MaSTherCell offers to both its customers and its partners are:

MaSTherCell's customers include many of the world's leading pharmaceutical and biotech companies, as well as research institutions and hospitals involved in cutting edge cell therapy.

Neil Reithinger was appointed Chief Financial Officer, Secretary and Treasurer on August 1, 2014. Mr. Reithinger is the Founder and President of Eventus Advisory Group, LLC, a private, CFO-services firm incorporated in Arizona, which specializes in capital advisory and SEC compliance for publicly-traded and emerging growth companies. He is also the President of Eventus Consulting, P.C., a registered CPA firm in Arizona. Prior to forming Eventus, Mr. Reithinger was COO & CFO from March 2009 to December 2009 of New Leaf Brands, Inc., a branded beverage company, CEO of Nutritional Specialties, Inc. from April 2007 to October 2009, a nationally distributed nutritional supplement company that was acquired by Nutraceutical International, Inc., Chairman, CEO, President and director of Baywood International, Inc. from January 1998 to March 2009, a publicly-traded nutraceutical company and Controller of Baywood International, Inc. from December 1994 to January 1998. Mr. Reithinger earned a B.S. in Accounting from the University of Arizona and is a Certified Public Accountant. He is a Member of the American Institute of Certified Public Accountants and the Arizona Society of Certified Public Accountants.

Prof. Sarah Ferber was appointed Chief Scientific Officer on February 2, 2012. Prof. Ferber studied biochemistry at the Technion under the supervision of Professor Avram Hershko and Professor Aharon Ciechanover, winners of the Nobel Prize in Chemistry in 2004. Most of the research was conducted in Prof. Ferber's Endocrine Research Lab. Prof. Sarah Ferber received TEVA, LINDNER, RUBIN and WOLFSON awards for this research. Prof. Ferber's research work has been funded over the past 15 years by the JDRF, the Israel Academy of Science foundation (ISF), BIODISC and DCure.

Guy Yachin has served as a director since April 2, 2012. Mr. Yachin has served as CEO of NasVax Ltd., a company focused on the development of improved immunotherapeutics and vaccines and as CEO MultiGene Vascular Systems Ltd., a cell therapy company focused on blood vessels disorders, leading the company through clinical studies in the U.S. and Israel, financial rounds, and a keystone strategic agreement with Teva Pharmaceuticals Industries Ltd. He was CEO and founder of Chiasma Inc., a biotechnology company focused on the oral delivery of macromolecule drugs, where he built the company's presence in Israel and the U.S., concluded numerous financial rounds, and guided the company's strategy and operation for over six years. Earlier he was CEO of Naiot Technological Center Ltd., and provided seed funding and guidance to more than a dozen biomedical startups such as Remon Medical Technologies Ltd., Enzymotec Ltd. and NanoPass Technologies Ltd. He holds a BSc. in Industrial Engineering and Management and an MBA from the Technion - Israel Institute of Technology. We believe Mr. Yachin is qualified to serve on our Board of Directors because of his education, experience within the life science industry and his business acumen in the public markets.

Dr. David Sidransky was appointed as a director on July 18, 2013. Dr. Sidransky is a renowned oncologist and research scientist named and profiled by TIME magazine in 2001 as one of the top physicians and scientists in America, recognized for his work with early detection of cancer. Since 1994, Dr. Sidransky has been the Director of the Head and Neck Cancer Research Division at Johns Hopkins University School of Medicine's Department of Otolaryngology and Professor of Oncology, Cellular & Molecular Medicine, Urology, Genetics, and Pathology at the John Hopkins University School of Medicine. Dr. Sidransky is one of the most highly cited researchers in clinical and medical journals in the world in the field of oncology during the past decade, with over 460 peer reviewed publications. Dr. Sidransky is a founder of a number of biotechnology companies and holds numerous biotechnology patents. Dr. Sidransky has served as Vice Chairman of the Board of Directors, and was, until the merger with Eli Lilly, a director of ImClone Systems, Inc., a global biopharmaceutical company committed to advancing oncology care. He is serving, or has served on, the scientific advisory boards of MedImmune, LLC, Roche, Amgen Inc. and Veridex, LLC (a Johnson & Johnson diagnostic company), among others and is currently on the board of Galmed and Rosetta Genomics Ltd. and chairs the board of Advaxis and Champions Oncology, Inc. Dr. Sidransky served as Director from 2005 until 2008 of the American Association for Cancer Research (AACR). He was the chairperson of AACR International Conferences during the years 2006 and 2007 on Molecular Diagnostics in Cancer Therapeutic Development: Maximizing Opportunities for Personalized Treatment. Dr. Sidransky is the recipient of a number of awards and honors, including the 1997 Sarstedt International Prize from the German Society of Clinical Chemistry, the 1998 Alton Ochsner Award Relating Smoking and Health by the American College of Chest Physicians, and the 2004 Richard and Hinda Rosenthal Award from the American Association of Cancer Research. We believe Mr. Sidransky is qualified to serve on our Board of Directors because of his education, medical background, experience within the life science industry and his business acumen in the public markets.

Yaron Adler was appointed as our director on April 17, 2012. In 1999 Mr. Adler co-founded IncrediMail Ltd. and served as its Chief Executive Officer until 2008 and President until 2009. In 1999, prior to founding IncrediMail, Mr. Adler consulted Israeli startup companies regarding Internet products, services and technologies. Mr. Adler served as a Product Manager from 1997 to 1999, and as a software engineer from 1994 to 1997, at Tecnomatix Technologies Ltd., a software company that develops and markets production engineering solutions to complex automated manufacturing lines that fill the gap between product design and production, and which was acquired by UGS Corp. in April 2005. In 1993, Mr. Adler held a software engineer position at Intel Israel Ltd. He has a B.A. in computer sciences and economics from TelAviv University. We believe Mr. Adler is qualified to serve on our Board of Directors because of his education, success with early-stage enterprises and his business acumen in the public markets.

Ashish Nanda was appointed a director on February 22, 2017. Since 1990, Mr. Nanda has been the Managing Director of Innovations Group, one of the largest outsourcing companies in the financial sector that employs close to 14,000 people working across various financial sectors. Prior to that, from 1991 to 1994, Mr. Nanda held the position of Asst. Manager Corporate Banking at Emirates Banking Group where he was involved in establishing relationship with business houses owned by UAE nationals and expatriates in order to set up banking limits and also where he managed portfolios of USD $26 billion. Mr. Nanda holds a Chartered Accountancy from the Institute of Chartered Accountants from India. We believe that Mr. Nanda is qualified to serve on our Board because of his business experience and strategic understanding of advancing the valuation of companies in emerging industries.