The targets were refined, thanks to a new understanding of high-grade systems across the gold belt, based on geophysical conductivity data that Auryn had collected over the years

The targets, which are within known gold-bearing systems, were refined, thanks to a new understanding of high-grade systems across the gold belt based on geophysical conductivity data that Auryn had collected over the years, according to the company. 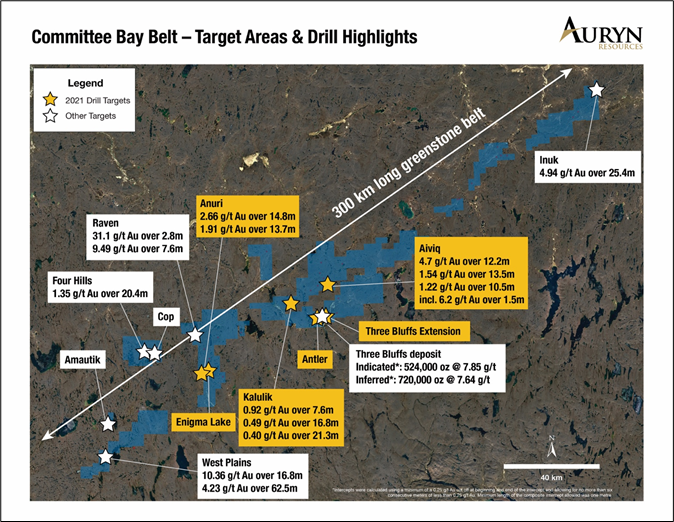 Auryn may look at expanding the resource where it has interpreted geophysical data in the area that hosts the Three Bluffs deposit and defining new pods on mineralization just north of the deposit area.

Committee Bay is covered by a thin layer of till cover that can obscure mineralized systems, making geophysics to help discover target areas even more important on the project, a fact Auryn’s COO Michael Henrichsen acknowledged Tuesday.

"We have drilled the desired widths of gold mineralization at Committee Bay, however targeting high-grade gold through the thin layer of till cover that obscures the mineralized systems has been a challenge,” Henrichsen told shareholders. “We believe our major geophysical breakthrough is essential for targeting high-grade through the till sequences and look forward to our 2021 drill program."

He added: “Our confidence has grown considerably over the past five years as our technical team's targeting methods have evolved. We are excited to capitalize on our extensive work to-date with Fury Gold Mines in the current gold environment."

The Dow Jones hits the magic 30,000, as more stimulus looms and easing continues