The Vancouver-based junior released results on Wednesday from its ongoing drill program at the project that includes 18.6 grams per ton (g/t) gold over 19.3 metres (m) within a wider interval of 7 g/t gold over 54.6m.

Great Bear has now drilled 100,000m over 180 holes at the LP Fault, a significant gold-hosting structure that has been seismically imaged to extend to 14 kilometres (km) depth that Great Bear has interpreted to have up to 18km of strike length.

The aforementioned results came from Section 20050 on the zone, which saw the highest density drilling and illustrates high-grade continuity from surface to a depth of 400 vertical metres, the company said in a statement. Other sub-intervals from the section include a high strain zone that assayed 52.8 g/t gold over 2.8m, including a strongly mineralized core of 194 g/t gold over 0.6m, and a separate zone which assayed 23.2 g/t gold over 5.3m. 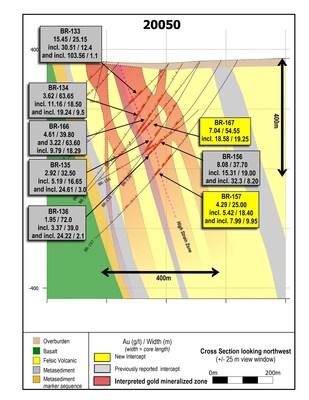 Great Bear also reported results from a separate drill hole on Section 20900 northwest of the area, which intersected 20.7 g/t gold over 3.8m, within a total mineralized zone assaying 2 g/t gold over 45.9m.

In a statement accompanying the results, CEO Chris Taylor told investors that the LP Fault system is nearly unparalleled in terms of exploration success.

"It has been less than a year and a half since our LP Fault discovery, but with over 100,000 metres drilled in 180 holes, it's increasingly apparent that the consistency and scale of this gold mineralized system has few recent exploration parallels,” Taylor said.

“We are currently completing a series of drill holes designed to test and refine our geological and gold mineralization model and plan to release results of this work over the coming weeks."

Great Bear Resources is well financed and drilling at one of the...